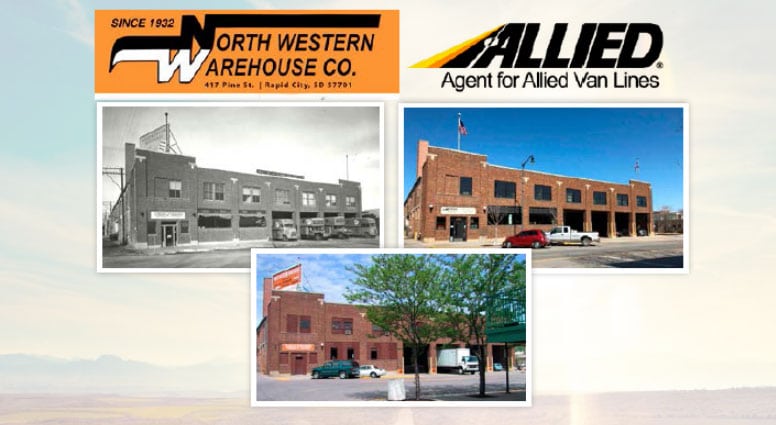 For over 86 years, North Western Warehouse, an agent for Allied Van Lines, has been serving Rapid City and the surrounding area with their moving and storage needs. A third-generation family business that was started in 1932 as the area’s first bonded public warehouse and has grown into today’s full service moving and storage provider, first commercial and freezer storage, and first record storage and shredding management service.

North Western Warehouse was started in 1932 and Wally Koppmann was appointed Manager by Alex Johnson, the former Vice President of the North Western Railroad. In 1938 NWWC began using trucks and in that same year Wally became President upon Alex Johnson’s death. In 1956 Wally purchased NWW from the railroad with his good friend, John Materi, and bought him out upon his death. Wally’s son, Dough, purchased the business upon his death in 1981.

Doughlas H. Koppmann joined the company in 1958 as a warehouseman. Over the years, he packed, loaded, drove, sold, and even cleaned the office and trucks. He was also NWW’s accountant and General Manager. He completed his 50th year with the company on June 4th, 2008. He then stepped back from active management of the company. On November 1st, 2010 he sold the business to his two sons; Jason and Jerred Koppmann.

Jerred Koppmann is a lifelong resident of Rapid City. He graduated from Montana State University and started working for the company in 1986 as a warehouseman. Jerred has performed every conceivable task associated with the moving and storage industry since then. On November 1st, 2010 he purchased half of the company from his father, becoming President.

Jason Koppmann joined the company in 1979. Like his father, he started by sweeping floors, packing, loading, and driving trucks. After attending SDSU, Jason was the Operation Manager of the Trucking Division before transferring to the Commercial/Record Storage Division. Jason became our Vice President upon the retirement of Dough Koppmann. On November 1st, 2010 Jason purchased half of the company from his father.

Three generations of excellence have built a legacy of serving the region with honesty and integrity. It has been the Koppmann family’s greatest pleasure of serving. Thank you!